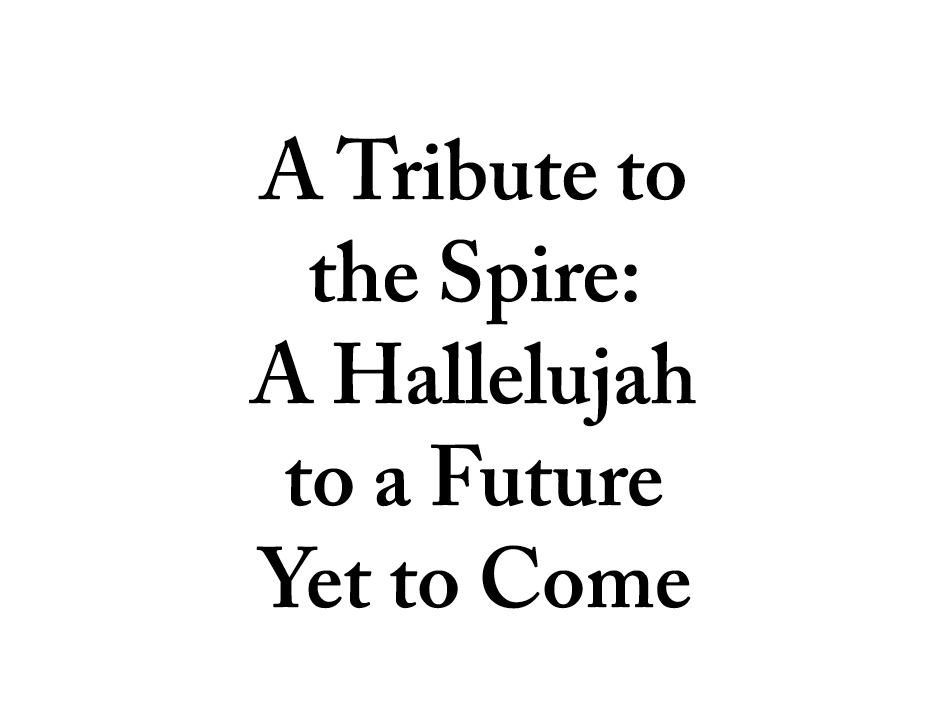 Text written on the occasion of Özlem Günyol & Mustafa Kunt’s exhibition UP! UP! UP! at Temple Bar Gallery & Studios, Dublin, April 2011.

A Tribute to the Spire: A Hallelujah to
a Future Yet to Come – by Rana Öztürk

Özlem Günyol & Mustafa Kunt’s four-piece work UP! UP! UP! takes its inspiration from Dublin’s Spire, known also as the Monument of Light – the thin, 120-metre-long structure that has been standing on the city’s O’Connell Street since 2003. Claiming to be the tallest sculpture in the world, this needle-like monument is unavoidable in the middle of the city. The first encounter with it is often one of curiosity, wonder, suspicion, amazement and surprise due to its overwhelming height, highly futuristic look, and inappropriate appearance and position among the more intimate, shorter, city centre buildings. Most cities have a famous tall building, a tower, monument or a skyscraper that with time becomes a symbol for the city, a point of reference for its residents, a tourist attraction for visitors, a historical site or a place that offers the best possible views of the city. The Spire in Dublin, though, is a site of ambivalence, at least at first sight… Özlem Günyol & Mustafa Kunt, who visited Dublin as artists in residence at Temple Bar Gallery and Studios for three months, have made use of their first encounter with the Spire as the basis of the work they produced during their stay in Dublin.

UP! UP! UP! consists of four separate pieces. Two main elements of the work are two paintings, which together represent a one-to-one scale portrait of the Spire. User’s Manual, which documents a historical timeline of the monument and the song “Up Went Nelson”, is presented on the wall as reference material for the viewer. Lastly, the forth element of the work is a performance of a song based on the melody and structure of “Up Went Nelson” with new lyrics written by the artists for the Spire. While the paintings play on the idea of real life representation of the monument in a
gallery context using its formal qualities and size, the song represents the complex historical and political background of the monument and the symbolic significance of its site for Dublin.

Günyol & Kunt make use of the exact physical appearance and actual measurements of the Spire to translate it on to a pictorial plane. The Spire is a stainless steel conical structure that has a diameter of three metres on the ground that gradually narrows to 15 centimetres at the top. On the picture plane, it is represented as a rectangular painting of three metres in width, with all the height of the monument divided into several sections folded onto each other. The result is a monochrome abstract painting that actually depicts the whole Spire in two dimensions. The second painting, placed on the floor of the gallery space, is also very minimal in its form and complements the other one with its round shape and choice of colour. A circle in the size of the bottom part of the Spire, this painting acquires the quality of text-based works of Conceptual Art of the late 1960s and 1970s, with the words UP! UP! UP! written on it. These words somehow
enhance the sculptural quality of the piece on the floor and incite the viewer to visualise the monument rising up from the painting. This, in a sense, completes the first painting, rendering a three dimensional image of the Spire.

The work culminates in a singing performance of a song written by the artists for the Spire based on the tune of an earlier song “Up Went Nelson”. This time, the words UP! UP! UP! read almost like a call to step up to the painting and sing the song. The first viewing of the piece at Temple Bar Gallery and Studios indeed turned the painting into a stage where five singers sang the song standing on. In this way the bleak image of the monument got broken up with the addition of a human element to it. Along with the traces of the singers’ footsteps left on the painting, the recording of the performance is to be included in later presentations of the work. A mocking exaltation of the Spire, this singing represents a possible way of engaging with the Spire despite its distant, cold outlook, while also connecting it to a past that it seems not so willing to acknowledge.

The Spire, controversial in its dominating position over the city, stands in the place of another controversial monument, Nelson’s Pillar, which had been standing there from 1808 till it was blown up in 1966 by the IRA. This 40-metre-high granite pillar was put up in order to honour Horatio, Lord Nelson, an English navy hero, who was famous for his role in the Napoleonic Wars and his leadership at the Battle of Trafalgar, where he was shot dead in 1805. Soon after the erection of the pillar with a statue of Lord Nelson on its top there were debates about its removal due to many
reasons. It was seen as an obstruction to the traffic; there were concerns about whether it was aesthetically good enough; and as a symbol of the troublesome colonial history of Ireland, many nationalists did not find it appropriate for the city. There were suggestions to replace the statue with statues of other Irish historical figures, which never led to any actual decision. It was only in 1966, the 50th anniversary of the Easter Rising, that these debates came to an end with the bombing of the pillar by members of the old IRA.

After the blowing up of the pillar, Go Lucky Four, a group of school teachers from Belfast, wrote the song “Up Went Nelson” set to the tune of “The Battle Hymn of the Republic”. The song was very popular and remained number one on the Irish music charts for eight consecutive weeks. It is also an example of how cultural forms migrate and take different meanings in different contexts. For instance, “The Battle Hymn of Republic” was a popular hymn that was written during the American Civil War, and is still very well-known as an American patriotic song. It was based on
the same tune as “John Brown’s Song”, a marching song about the abolitionist John Brown who gave his life to put an end to slavery. Both songs were based on an earlier tune called “Say, brother, will you meet us” that goes back to the American Christian camp meeting movement of the early to mid-1800s. Therefore, the song/tune represents multiple authors and different ideologies depending on the context and time it was used. Indeed, there have been many other versions of the song, most often composed for celebrations of different occasions, either in playful ways or in attempts at glorification.

In UP! UP! UP!, Günyol & Kunt trace the source of the song, presenting earlier songs in which the tune was used, as well as other songs written for the destruction of Nelson’s Pillar. Along with “Good Lord Nelson” by the Irish folk musician Tommy Makem and “Nelson’s Farewell” played by the band Dubliners, “Up Went Nelson” represents the mocking, witty humour of the Irish, an amusing way of engaging with an incident long awaited. With a similar gesture of appropriating an earlier tune, Günyol & Kunt make a new song that this time addresses the Spire with a humorous approach to its current state in the city. Built as part of the plans for the revival of O’Connell Street, which had been in decline since the 1970s, the Spire rises confidently above the city as a pretentious symbol of the economic boom the country experienced from the 1990s to 2000s. In the context of the recent collapse of the Irish economy, this tall shiny monument has inadvertently become an embodiment of this period of over-indulgence. Nelson’s Pillar remembers the past; the Spire aspires to the future. Nelson’s Pillar symbolizes the colonial power; the Spire symbolises the glory of the Celtic Tiger. Nelson’s Pillar is a memorial; the Spire is a contemporary urban landmark. Nelson’s Pillar offers a view of the city to its visitors; the Spire looks over the city all by itself. Nelson’s Pillar commemorates an imperial hero; the Spire celebrates itself. Nelson’s Pillar represents a troubled history; the Spire represents nothing, but itself…