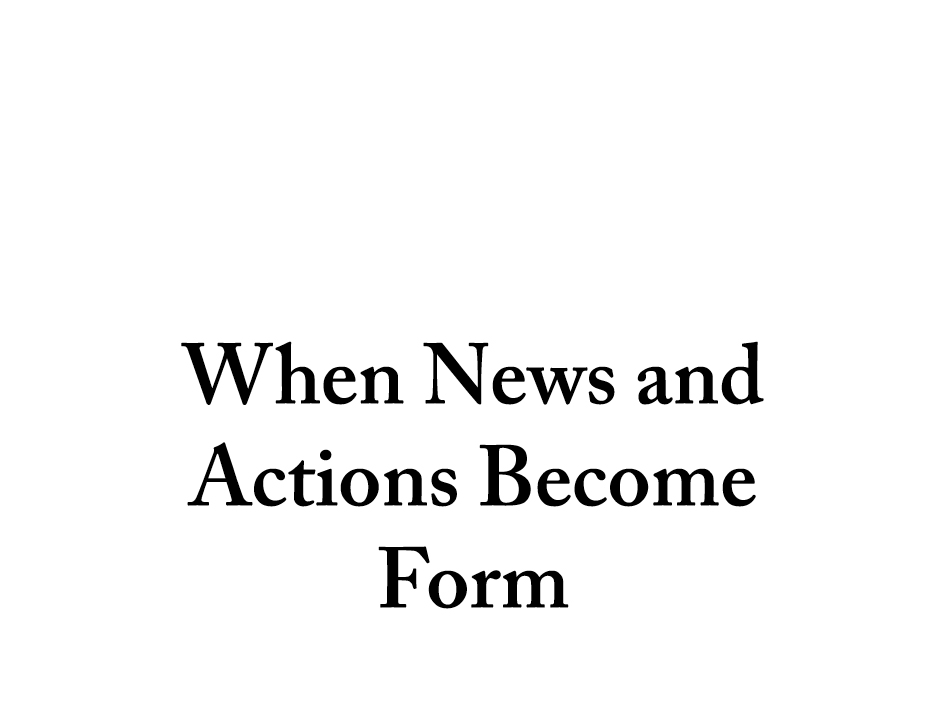 This text is written for the booklet that has
been published by Dirimart for the solo show
Özlem Günyol & Mustafa Kunt, displaying
between November 13 – December 12, 2015

WHEN NEWS AND ACTIONS BECOME FORM

In Turkey, everyday life is being shaped by an increasing tension and violence in a context where a new unexpected incident dominates the daily agenda almost everyday and problems and discussions overlap, get forgotten or become insignificant as a result. Due to political tension caused by increasingly authoritarian attitudes of the ruling party, the country, the city, the atmosphere, our souls suffer from a chronic restlessness. From Gezi protests to Soma coal mine accident, bombings in Diyarbakır, Suruç and Ankara, from Syrian refugees whose bodies hit the Mediterranean shores to heated conflicts in the South East and the repeating of general elections, we are almost out of breath while following events of immense gravity that deeply affect the flow of everyday life almost instantaneously. This experience in the local context of Turkey is shaped by a larger constellation of economic, political and power relations in a global context. Özlem Günyol and Mustafa Kunt name their exhibition with reference to the ever-changing daily agenda and people’s emotional states in flux. Yet, rather than focusing on moments of insecurity and unrest, they highlight moments of resistance and collective experience at both local and international level.

minute-by-minute exhibition centres around the work Right (2015), which highlights the concept of right as the basis of many of the issues at stake in the agenda. Taking as a starting point the idea that the foundational function of a constitution is to secure the basic rights and freedom of individuals, the work graphically brings together all 36 of the instances that the word “right” is used in the constitution of the Republic of Turkey. Through the overlap of all these words, the whole text of the constitution is also brought into the gallery, and while the word “right” is highlighted, the rest of the text is pushed to the background, such that they look almost censured because of the merging of words as dark illegible lines. As such, the fundamental issue in the relationship between the state and the citizen, the ruling power and the individual becomes a central concern for the exhibition and creates a link between all the other works.

As Günyol and Kunt’s first solo exhibition in Turkey, minute-by-minute draws attention to some of the issues that the artists have been exploring for quite a long time, yet allowing for more local interpretations in the context of the current political situation in Turkey. The exhibition brings together seven works, five of which are specifically made for this show. In these works, the artists continue the conceptual approach that they have put into practice in many of their earlier works. In order to draw attention to various issues and situations they use language, appropriate images and sound from daily news, the media and the internet, and isolate and transform them into forms, rather than changing them with a subjective interpretation. Günyol and Kunt reduce their subject matter down to a formal or conceptual essence and represent them in a situation where the audience confronts the daily information and news as part of a larger system.

Just as they did with the word “right”, it is a common strategy for Günyol and Kunt to highlight a situation, a fact, or a phenomenon by making it more visible. For example, Self-Defence (2015), which is another central piece in the exhibition, visualizes the collective sound of protestors during the Gezi Park resistance. In this piece, the artists magnify a ten second sound file recorded during the protests and turn it into a 330 metre razor wire. The sound waves gain physical forms as steel plates and are fixed on a spring wire as if they are protrusions on a razor wire. The fact that the audio recording is a file found on the internet highlights the anonymity of the spread of Gezi protests. On the other hand, the razor wire was produced in one piece, presenting all sound waves, each unique in shape, as part of a whole, reminding of the Gezi experience as a collective existence within a plurality of differences. Using as a starting point the use of razor wire for protection purposes, the artists visualized a similar type of protected area created by the coming together of protestors against the oppressing power. The fact that Gezi Park still continues to exist as a park as a gain of the resistance can be considered a result of such collectively created protected area. The installation of the work in the gallery space aims to reflect a sense of solidarity, the idea of a crowd that incorporates differences while also creating a solid ground for itself.

In a similar vain, On the Stage (2010) and Fireworks (2015) also point at the visuality of certain moments during protests and demonstrations. Günyol and Kunt endeavour to find the most appropriate form and medium for each subject matter they deal with. For these two works they have chosen the medium of video. The first one is a performative work that they have made in collaboration with a dancer. In this short film that is based on some photographs taken at various protests, the dancer stops her movements whenever her body matches the poses of protestors in photographs and stays still for a few seconds. In that way, the video detaches these moments from their contexts highlighted by the media and draws attention to the corporeal aspects of protests by making the poses even more visible as presented outside of the language of the media. This work reminds of some figures from Gezi resistance, such as the lady in a red dress being tear-gassed by the police, an image that became iconic through its circulation in the media. It also brings to the fore a bodily presence of protestors, an existence in-between individuality and collectivity.

Fireworks also makes use of protest images found on the internet and is based on fireworks that have become a common tool used during protests against police suppression. This work digitally isolates protesters’ fireworks from their environment and presents them in film form. It points at a strategy for ground protection, this time a strategy that uses both visuality and sound at the same time. Fireworks which are commonly used during celebrations gain a new function at protests and turn into a defence tool that keeps the police away. Günyol and Kunt’s representation of fireworks detached from protest settings transforms them in such a way that they regain their original function. This is a transformation that reminds of the celebratory mood during Gezi protests when a sense of unity and solidarity intensified among the protestors. With the diffusion of the sound of exploding fireworks across the gallery space, this duality in the function of fireworks also spreads across other works in the exhibition and enables to approach issues such as resistance, rights, and defence with reference to a similar type of duality. For example, the razor wire could evoke a sense of physical pain and violence due to its structure and material, but as a holistic construct that brings together differences it also symbolizes a stance against the violence of oppressing powers rather than indicating the violence it inflicts itself.

Other works in the exhibition put international political and economical power structures against resistance and protest movements. With the inclusion of these works, the exhibition avoids the risk of being interpreted only in relation to the turbulent political context of Turkey, but allows for seeing local issues as part of a global context. For example, the work The Myth (2013) is based on the story of Europa in Greek mythology. The work connects the abduction of Europa by Zeus disguised as a bull to contemporary capitalist power mechanisms against which Occupy resistance movement emerged. European Central Bank has recently appropriated an image of Europa on a 2000 year old Greek vase and transferred it onto 5 Euro banknotes, putting the image into circulation. Referring to this as another act of abduction of Europa, the artists have focused on the figure of Zeus in order to draw attention to the hegemony of financial markets and global capitalism as part of which the European Central Bank also operates. In this new story, the bull figure that stands for Zeus is now the symbol of capitalism and it is identical with the Charging Bull sculpture on Wall Street. At this point, the resistance highlighted in the previous works are now part of a greater resistance against global capitalism. The occupy movement that have spread across many cities and countries starting with the Occupy Wall Street in 2011, was a demand for global justice against inequalities caused by the dominance of large corporations and the global financial system. In The Myth, Günyol and Kunt appropriate an image of a raging bull from an Occupy Wall Street poster, which shows the bull tied with ropes in an attempt to keep it under control, and place it on a vase made in the form of an ancient Greek vase. As such, the work itself creates the myth of today. The Vendetta mask decorations on the vase put the anonymous people’s movement against global capitalism. As such, The Europa myth, which creates a link between the ancient Greek and the idea of pan-Europe as represented by the European Central Bank, becomes a part of a greater economical and political struggle on the vase.

Günyol and Kunt address the inequality in the distribution of wealth as emphasized with the slogan “we are the 99 percent” by looking at the other side of the equation. The Portrait (2015) is a piece that brings together in a photographic print the wealthiest 100 people listed in Forbes magazine’s World’s Billionaires list for 2015. The portrait, a composite image made by printing of 100 photographs on top of each other, presents an anonymous character, representing these people in a manner similar to the anonymity of protestors. In this image no individual can be distinguished in the overlapped photographs; ghost images of all those people blend into a single image, as if it is an identikit. The dimensions of the photograph are proportioned to the format of biometrical portrait photographs common for passports and visa applications. As such, the work imitates an official visual aesthetics and visualizes the way in which these hundred people lose their individuality and become a statistical figure. In that way it also connects wealth, financial markets and the functioning of the capitalist order to the official ideology of states. One can see a human figure on this photograph only looking from a certain distance, which evokes the distance between the characters that make the portrait and the rest of people representing the 99 percent. The fact that the list includes billionaires from all around the world underlines the global dimension of this distance.

The final work in the exhibition, Constitutive Lines (2015) uses a similar process of overlapping and reduces national flags into geometrical lines such that the flags can no longer be distinguished from each other. The work makes use of the lines used in the design of flags and brings together all the flags through shared geometrical forms and a linear language devoid of any colour and symbol that can be associated with a nation. As a result, the flags lose their symbolic function and disappear in the plurality of overlapping lines. The collective existence of protestors as emphasized in the other works is faced with a global world where all the borders mix into each other. Overall, in this exhibition Günyol and Kunt associate the common language of resistance movements with symbols of power mechanisms. Thereby, they continue their explorations on borders, states, globalization and belonging, subject matters that they have been working on for so long, yet with a perspective that also takes into account today’s unstable troubled times.