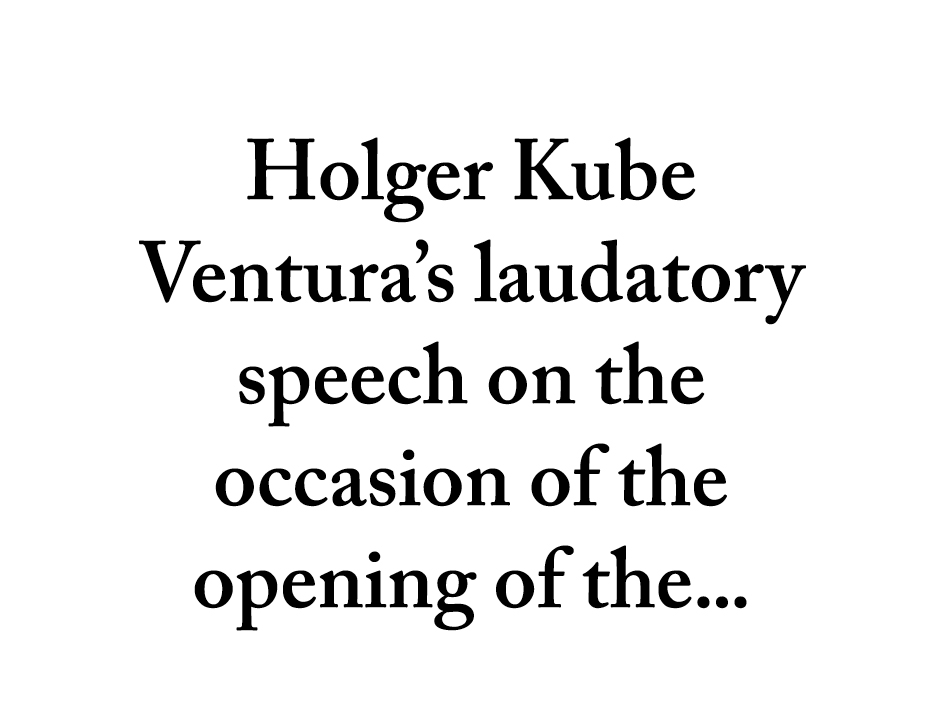 Holger Kube Ventura’s laudatory speech on the occasion of the opening of the exhibition “Beyond the Horizon” by Özlem Günyol & Mustafa Kunt, winners of the 2017 “HAP-Grieshaber-Preis der VG Bild-Kunst,” in the Deutscher Künstlerbund project space, Berlin, September 5, 2017

The exhibition to be inaugurated here showcases five pieces by Özlem Günyol and Mustafa Kunt that are representative of the Turkish-born duo’s work. All of them were created by way of an extensive artistic working process resulting in clearly structured pictorial forms that have a lot to offer in a visual sense – our first impression of the works is that they are “beautiful.” In the piece “Toward the Horizon,” exhibited today for the first time, we bear witness to the weeks of the artists’ stoic application of single, straight black lines with an ink pen to create a monumental, deep-black surface. Its density exerts an almost magical pull on the viewer. It is easy to see that the object on the plinth, too, is not merely an industrially produced rope, but in fact a large piece of cloth that has been turned and twisted for so long it has transformed from a plane into a line. The energy and tension that have gone in to creating this form are fully tangible. Both pieces were handmade in a lengthy process and their Minimalist production principles are easy to grasp. They give us the aesthetic pleasure of sensuously reenacting in our minds the vast number of repetitions carried out by the artists and of looking for variance in terms of material or specific to the handling.
Yet as soon as we read the information accompanying the works, our first impression changes. We find out that exactly 188,333 lines of 60-cm length were made for “Toward the Horizon,” and that 60 cm is the average length of a step made by a person walking. That the total length of the lines is 113 kilometers and that this is the shortest distance between Tunisia and Italy. The “way to the horizon,” from Africa to Europe – such references instantly conjure up the headlines of recent years about refugees on the Italian island of Lampedusa and the numbers of people who have died while attempting the journey. The onerous drawing of so many black lines then appears as a reenactment of such an escape: It is as though the many steps to Europe are here being counted, and in the end amount to an impenetrable darkness. However, in order to make these steps one would need to be able to walk on water like Jesus as he crossed the Sea of Galilee, or alternatively walk the sea floor between Tunisia and Italy. So is this piece a monument? As in their other works navigating the issue of refugee routes, here Günyol/Kunt arrive at a result that encircles the topic on a range of different levels of meaning.

Our view of the object on the plinth also changes entirely when we learn that this piece of fabric turned into a rope is in fact a 22-meter-long banner used at a demonstration that reads “…AND JUSTICE FOR ALL!” The fragmentary demand would surely have made quite an impact on such a large format. But maybe a more tangible tool was needed to actually bring about the called-for change – and maybe a piece of rope would be just such a thing: It could be used for pulling out prison bars, tying someone up, or at least staging a tug-of-war. But whom would this serve? Are the artists ridiculing spiritless slogans thrown about at demonstrations and calling for more concrete action instead? Is it an artistic proposal for finding ways out of one’s position of powerlessness in face of state authority through Situationist experiments, as suggested by Debord? Or are the protesters being threatened with hanging? Each interpretation reflects the viewer’s attitude to the political conflicts between hegemon and opposition. Incidentally, it remains unclear whether the banner was ever actually hung anywhere, or whether in fact it might not even be a readymade, but an artifact created by the artists for the purpose of realizing this piece. The only thing that is certain is that the work was created in 2010, the very year the judicial reform proposed by Prime Minister Erdoğan was approved in the context of the Turkish constitutional referendum.

Several years later, Günyol/Kunt realized a sculpture that raises issues concerning the potential of peaceful protest and its ability to defend those it champions in a similar way. The piece consists of loops of razor barbed wire, its blades tracing the shapes of acoustic waves depicting the sounds of shouts and slogans chanted at the protests against the planned development of Gezi Park in Istanbul, which made the park famous. The artists thus translated sounds of protest into blades of self-defense, as suggested by the work title “Selbstverteidigung.” This in turn opens up a wide range of interpretations, and each is telling of the interpreter’s own stance on civil disobedience – be it more skeptical or optimistic. The sculpture may then on the one hand stand for the resistance movement’s ability to put up a fight, as an assertion: Whosoever wants to attack these voices will come to harm! On the other hand, the sculpture may be denouncing the opposition’s militarization, as it is now seemingly also prepared to accept bloodshed. Would that still constitute “self-defense”? Whichever the case may be, Günyol/Kunt’s sculpture describes an escalation, and it seems to be expressing an artistic voice looking to position itself with the resistance movements. This artistic voice has not yet found its place and neither does it see itself as being identical with, nor completely separate from direct counteraction. Günyol/Kunt’s practice is a political-artistic one that is acutely aware of the strengths and weaknesses of a restricted view of power and opposition on the level of representation. It is aware of the opportunities and risks of image politics, on the street, in the public sphere, in the sphere of the media and in the elitist shelter of an art exhibition.

Özlem Günyol and Mustafa Kunt both studied sculpture in Ankara. Today they also articulate their ideas and concepts in the media of drawing, print, installation, photography, video, sound and performance. All of their works, without exception, reference political issues. Many revolve around state representation, insignia of power and executive means and try to deconstruct these. Recurring themes include national flags and anthems, monuments, memorials, stately columns, plinths and flagpoles, the body language of election campaigners, methods of surveillance and the death penalty, the Euro and the richest 1%, Fortress Europe, state borders and passports, migration routes and refugee disasters as well as basic texts such as the United Nations human rights charter.

The 16-part piece “That which remains…,” likewise created specially for this exhibition, calls to mind this charter. On closer inspection, we see that each piece of paper shows key terms from the 1948 Universal Declaration of Human Rights. The letters forming these words are made of salt. Günyol/Kunt crystalized this salt from seawater they brought back from the Aegean Sea – to be more precise, from Dikili and Cesme in Turkey, and from Lesbos and Chios in Greece. As such, four of the main locations relating to the so-called refugee deal are named. In this deal, the EU and Turkey agreed that all refugees stranded in Greece as of March 2016 who do not apply for asylum there will be sent back to Turkey and in return a Syrian refugee from Turkey will be accepted for each Syrian deported from Greece to Turkey. The deal ignores several articles of the UN human rights charter. Günyol/Kunt crystalize the latter’s central moral concepts from the seawater across which the deportations are made.

The framed print created in 2015 and titled “hak” likewise seeks an image for the essence and real relevance of a text fundamental to a particular society – in this case, the Constitution of the Republic of Turkey. The artists set to work on this constitutional text by finding each instance of the word “hak” – which translates into English as “law” – and then aligning the pages in such a way that the word appears at the center of the surface. All pages of the constitution were aligned in this way, then superimposed and printed onto a single page. The result is a graphic depiction of a constitution centered entirely on the “law,” meaning, it is of utmost importance. However, unfortunately the alignment has obliterated all other words and notions described in the text, creating black strips reminiscent of censorship measures. So the obstinate insistence on the law is evidently not ideal. But is it at least aesthetic?

The two artists often use methods of superimposition, alignment and translation into other media. Examples of this are their sandwich print of portrait photos of the 100 richest people in the world, their sound installations based on all the national anthems, their analyses of election campaign slogans and banknote color schemes, and their series of works on national flags. The fifth new work by Günyol/Kunt in this exhibition, the installation “Reds, Yellows & Blues,” belongs to the latter. It consists of three monitors set up near ground level that actually show only these three colors, or rather – as indicated by the unusual plural forms used in the title – different hues of them. They were derived from the national flags of this world and change on the silent screen about every ten seconds. Evidently there is not just the one red, yellow or blue – those primary colors of the historical three-color theory, from which all other colors can be mixed – but ever new adjacencies in the continuum of the color spectrum and new potential fusions. This refers of course to national identities. The title of a famous work by Barnett Newman comes to mind – “Who’s Afraid of Red, Yellow and Blue?” – as do the attacks it has sustained.

What we can glean from Özlem Günyol and Mustafa Kunt’s oeuvre is that these conceptual artists appear to be looking to understand the nature of power and opposition, which they systematically question by way of analyzing symbols and representations of it. Their work is not lighthearted. They go about it rigorously and with great perseverance; they believe in the political potential of aesthetic experience – and they are not afraid to engage. The artistic actions they conceive lead to artworks that in turn may incite action able to overcome specific social formations. Their transformative artworks are assaults, incitements and objections that, prudently, do not assume an unmistakable position. For it is only in this way that the viewer’s perspective on formally abstracted information and events may become the focus of their reflection: How do I feel about this aestheticization of the horrors of our time? Does the work reflect my political passivity, or is it already part of a process of change? The work of this duo is not knowing, not cynical, polemic or accusatory. It may be somewhat sad, but it is never resigned. It rubs salt in the wound and asks who deals with it and from where. The clichéd search for new perspectives overused in art-speak actually fits here for once. Which is why I am delighted to see Özlem Günyol and Mustafa Kunt honored and supported by being awarded the HAP-Grieshaber Preis 2017.